Maa Shailputri – First Avatar of Durga: Maa Shailputri is the daughter of ‘Parvata Raju’ (Mountain King) – Himalaya/Himvanth. She is the first among nine avatars of Maa Durga and is worshipped on the First Day of Navaratri. In her previous birth, she was ‘Sati Bhavani Maa’, the daughter of King Daksha. Maa Shailputri, also known as Parvati was married to Lord Shiva. On the first day of Durga Navratri, Paravathi Devi is worshipped. Maa Shailputri holds a ‘Trishul’, a weapon, in her right hand and a Lotus in her left hand. She rides on a bull. She has a pleasant smile and blissful looks. 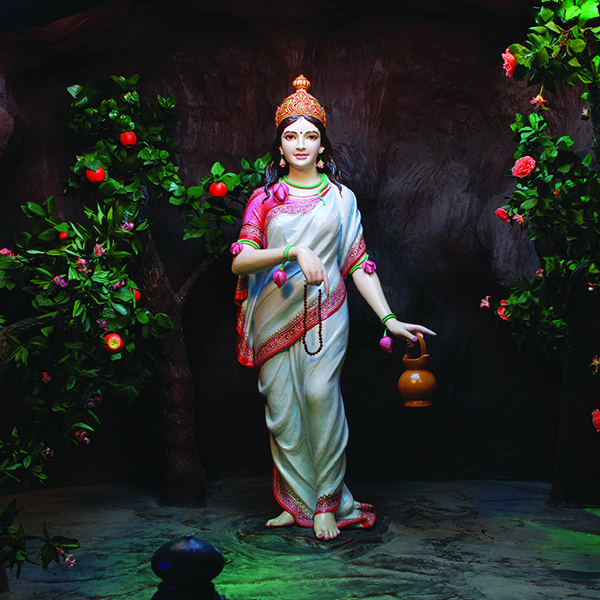 Maa Brahmacharini – Second Avatar of Durga: Maa Brahmacharini is worshipped on the Second Day of Navaratri. Brahmacharini is the goddess who performed ‘Tapa’ (penance) {Brahma – Tapa, Charini –Performer}. Maa personifies love and loyalty. She holds Japa Mala in her right hand and Kamandal in the left hand. She is also called as ‘Uma’ and ‘Tapacharini’ and provides knowledge and wisdom to her devotees. 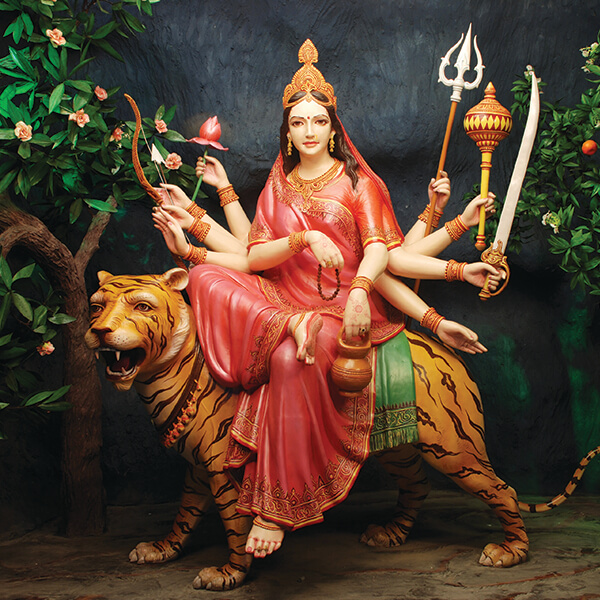 Maa Chandraghanta – Third Avatar of Durga: Maa Chandraghanta is worshipped on the Third Day of Navratri. She is very bright and charming. Durga Maa is astride a tiger, displays a golden hue to HER skin, possesses ten hands and three eyes. Eight of HER hands display weapons while the remaining two are respectively in the mudras of gestures of boon giving and stopping harm. Chandra + Ghanta, meaning supreme bliss and knowledge, showering peace and serenity, like cool breeze on a moonlit night. 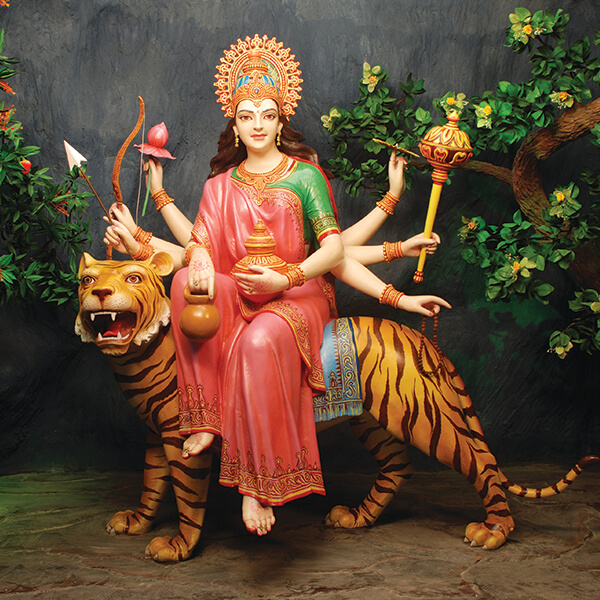 Maa Kushmanda – Fourth Avatar of Durga: Maa Kushmanda is worshipped on the Fourth Day of Navratri. She shines bright with a laughing face in all ten directions as the Sun. She controls the whole Solar System. Out of the eight hands, she holds several types of weapons in six hands and a rosary and a lotus in remaining hands. She rides on a Tiger. She likes offerings of ‘Kumhde’, hence her name ‘Kushmanda’ has become popular. 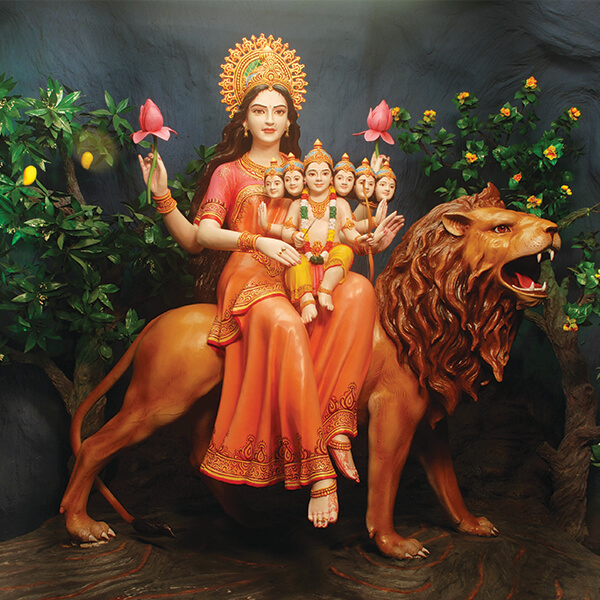 Maa Skanda – Fifth Avatar of Durga: Skanda Maa is worshipped on the Fifth Day of Navratri. She has a son ‘Skandaa’ and holds him on her lap. She has three eyes and four hands; two hands hold lotuses while the other two hands respectively display defending and granting gestures. It is said that by the mercy of Skandmata, even the idiot becomes an ocean of knowledge. The great and legendary Sanskrit Scholar Kalidas created his two masterpieces works “Raghuvansh Maha Kavya” and “Meghdoot” by the grace of Skandmata. Mata is considered as a deity of fire. She rides on a Lion. 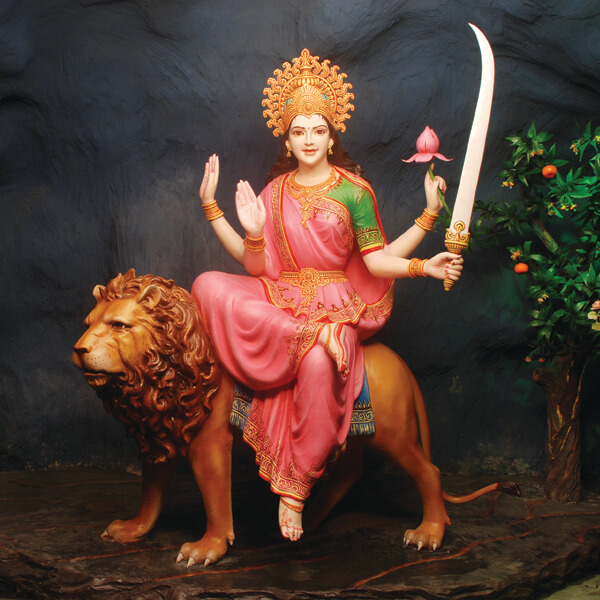 Maa Katyayani – Sixth Avatar of Durga: Maa Katyayani is worshipped on the Sixth Day of Navratri. Rishi Katyayan observed penance to get Jaganmata as his daughter. She blessed him and took birth as his daughter on the banks of river Jamuna for getting Lord Krishna as a husband. She is considered as prime deity of Vraj Mandal. Maa Katyayani has three eyes and four hands. One left hand holds a weapon and the other a lotus. She rides on a Lion. 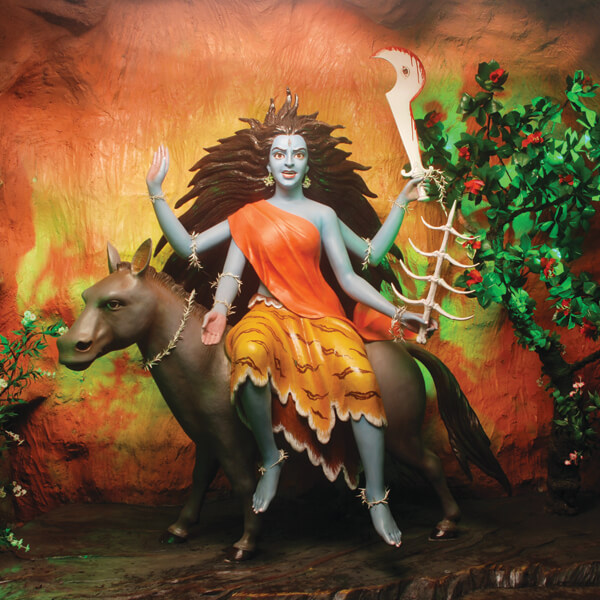 Maa Kalratri – Seventh Avatar of Durga: Maa Kalratri is worshipped on the Seventh Day of Navratri. She is dark and black like night; hence she is called ‘Kalratri’. HER hair is unlocked and she possesses three eyes and four hands, two of her right hands are in the mudras of “giving” and “protecting”. HER vahana is a faithful donkey. She is the destroyer of darkness and ignorance. She spills out fire from her nostrils. She holds a sharp sword in her left hand and a hook weapon in her lower hand. As she blesses her devotees with prosperity, she is also called ‘Shubhamkari’. 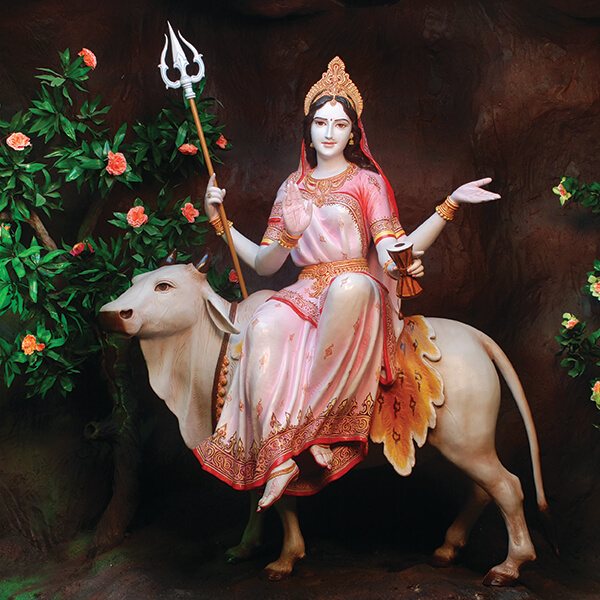 Maa Maha Gauri – Eighth Avatar of Durga: Maa Maha Gauri is worshipped on the Eighth Day of Navratri. Maha Gauri looks as white as the moon and jasmine. She has three eyes and four hands. Peace and compassion radiate from HER being and SHE is often dressed in a white or green sari. SHE holds a drum and a trident and is often depicted riding a bull. HER left hand is in the pose of allaying fear. HER right hand is in blessing mudra. 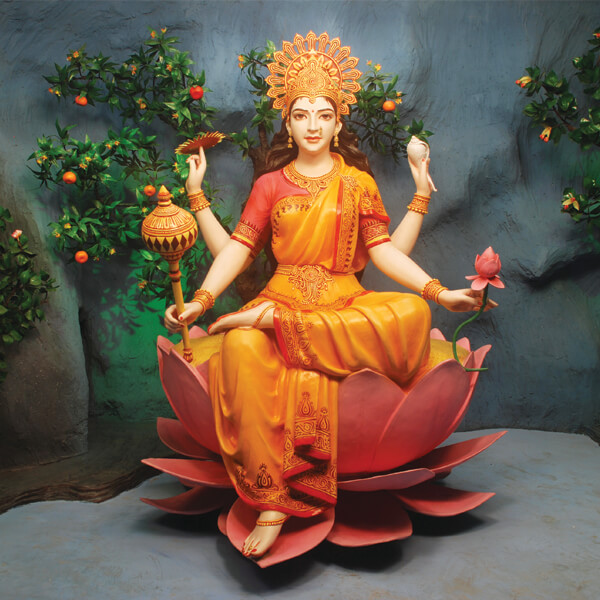 Maa Siddhidatri – Ninth Avatar of Durga: Maa Siddhidatri is worshipped on the Ninth Day of Navratri. Maha Shakti gives all the eight siddhis – Anima, Mahima, Garima, Laghima, Prapti, Prakamya, Iishitva and Vashitva. According to ‘Devi Puran’, the Supreme God Shiva got all these siddhis by worshipping the Supreme Goddess Maha Shakti. With her gratitude, his half body has become of Goddess, hence Lord Shiva’s name ‘Ardhanarishvar’ has become famous. According to some sources she rides on a Lion, other sources say she is seated on Lotus. Siddhidatri Devi is worshipped by all Gods, Rishis, Muniswaras, Siddha Yogis and all common devotees who want to attain the religious asset.